First, Do No Harm

A few weeks ago, I read the following contribution from Charlie Bilello of Pension Partners and it really resonated with me. Reposted with permission.

First, Do No Harm
By: Charlie Bilello

“It ain’t what you don’t know that gets you in trouble. It’s what you know for sure that just ain’t so.” – Mark Twain

First, do no harm.

As the election approaches, there is one certainty: you will never hear such words from either candidate. Instead, promises of action abound.

“And when I do these things, America will be stronger, smarter, wealthier, better … for everyone.”

And so we are ultimately left with many deeply flawed policies. Because doing something, anything, is often deemed to be better than doing nothing at all.

“No Child Left Behind.” “The Affordable Care Act.”

“From this day forward, all students will have a better chance to learn, to excel, and to live out their dreams.” – Bush, January 2002 at the signing of law.

“Once this reform is implemented, health insurance exchanges will be created, a competitive marketplace where uninsured people and small businesses will finally be able to purchase affordable, quality insurance.” – Obama, March 2010 at the signing of law

So we got action. The laws were passed and problems were deemed to be solved.

But were they? Are we really better off today because of these laws? The American people do not believe so and objectively, it would be hard to say they are wrong.

At the time, would doing nothing or waiting until they had a better law have been preferable? Probably, but how often do we choose inaction over action even if it is the right decision?

Not very often. The call to action is hard to resist: “time is of the essence.” We want to say we are doing something about perceived problems, not simply sitting there and thinking. Act now and think about the negative consequences later. And when those consequences arise, never admit that what you did may have been detrimental in any way.

What does this have to do with investing?

Everything. In markets, we are constantly being tempted to do something, to make a trade or wholesale portfolio change whether it is warranted or not. Action is deemed better than inaction. But at least half of the battle in investing is won by doing just the opposite. By avoiding unforced errors, you often win by default. Those errors are the result of overconfidence and believing you “know for sure” something that “just ain’t so.”

Last week at the Stocktoberfest conference I gave a presentation on this topic, illustrating the power of not knowing. 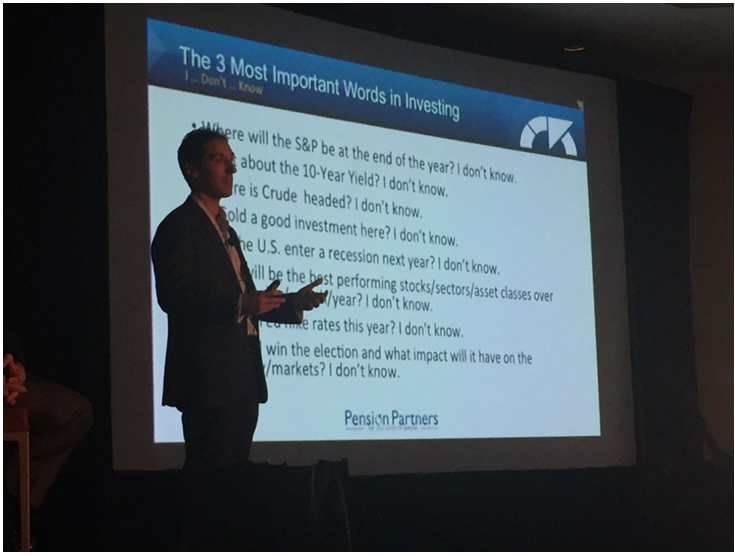 Why is admitting you don’t know something so important? Because “knowing” something, or more accurately thinking you “know something,” often leads to unwarranted action.

Since the low in March 2009 the S&P 500 is up over 260%. Doing absolutely nothing over the past seven years would have been the best course of action for many. But doing nothing is hard, as investors have been goaded to sell over the years for a variety of reasons:

This is just a small sample; the myths that encourage investors to act seem to grow with each passing day. And act they do for they believe they know something that just isn’t true.

And so it should come no surprise to learn that Steve Edmundson (CIO of Nevada’s $35 billion public retirement system) is by himself outperforming pension funds that have hundreds on staff. His secret:“do as little as possible, usually nothing.”

Now, to be sure, I don’t believe in the myth of a purely passive investor. An active decision always has to be made even it’s as simple as determining the weightings of a stock/bond asset allocation using index funds. And over time, an active decision will need to be made on changes in your portfolio as your needs/goals/risk tolerance change.

For active traders/investors, action is of course required. If you are a value/momentum investor, you need to act when there is no longer value/momentum in a particular name. But to have any chance at repeated success (and with over 10,000 hedge funds the odds are stacked against you), such action should be based on evidence and process rather than myths and whims.

For long-term investors, any decision to act should be a long, hard decision. When tempted to act, take a deep breath, go for a walk, or read a book. Action should only come after deep thought/analysis as to why you are acting and whether there is any credible evidence to suggest it will be better than doing nothing at all.

First, do no harm.

All investing involves risk, including the possible loss of principal. There is no assurance that any investment strategy will be successful. Past performance is not an indication or guarantee of future result