Has the Health Care Vote Killed the Trump Rally?

All eyes on health care

This week, the US House of Representatives failed to win enough support to pass a bill known as the American Health Care Act.  This bill was intended to fulfill a key Trump campaign promise to repeal and replace the Affordable Care Act.

Stocks struggled as negotiations took place.  Here is a six month chart of the S&P 500, showing recent weakness after a healthy rally since the election.  Notice the decline towards the upper right side of the chart.  In addition, the S&P has also fallen to its 50 day moving average shown by the solid blue line.

At the very top panel of the chart, the relative strength (RSI) shown in grey has faded to below neutral.  Momentum shown in the bottom panel (MACD) has also faded to neutral. 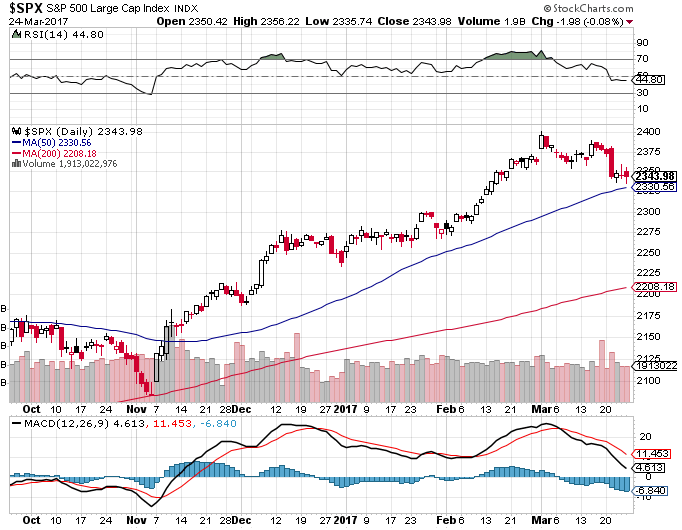 Health care in this country is a combination of important and competing priorities.  Here are a select few of those issues listed in no particular order:

Though this list doesn’t capture the full complexity of the issues, competing priorities will likely prevent a solution that satisfies everyone.

Many of us might agree on the idea of pre-existing conditions being covered, a private system with high quality care, and affordable coverage.  But in order to achieve these priorities we are going to need an individual mandate that everyone be covered including those who are healthy, and those who are not healthy.

As important as health care is, the Trump Administration and the Republican party’s failure to muster enough support for the bill could have bigger implications.  What if they also cannot pass their tax reform, infrastructure, and deregulation policies as well?

Should the tax, infrastructure, and deregulation plans also fail, at least half of the market rally since the election is on unstable ground and this could lead to a correction.

However, the other half of the rally since the election is attributable to better earnings and economic results in my opinion.  Also, I believe that there is broader support for tax reform and infrastructure improvement, a part of both party platforms during the election and arguably more impactful on the economy than health care reform.