As widely expected, the US Federal Reserve left interest rates unchanged at their meeting June 14-15.  The odds of a rate increase fell dramatically in recent weeks after a weak May employment report showed a decline in unemployment but also a marked decline in jobs created.  I believe as we reach full employment in this country, it is likely we will see fewer jobs created and that employment remains healthy in the US overall.

“Although the unemployment rate has declined, job gains have diminished. Growth in household spending has strengthened” according to Janet Yellen, US Fed Chair.  She also reiterated the Fed’s plan to gradually increase interest rates over the coming months.

The market then turned its attention to a referendum vote on June 23rd regarding whether the UK will remain in the European Union.  Should Britain exit (a.k.a “Brexit”) the EU, a realignment of Europe’s financial sector will occur.  The uncertainty over this vote has spooked the market and most stock indices fell this week.  The EU is a group of 28 European countries that have agreed to abide by certain rules to facilitate trade and commerce.  Polls suggest the vote will be close and volatility up or down is likely though the voting results.

Oil prices have lost momentum of late and stocks and oil have been highly correlated in recent months.  Here is a two year chart of oil showing a rally off the February lows. 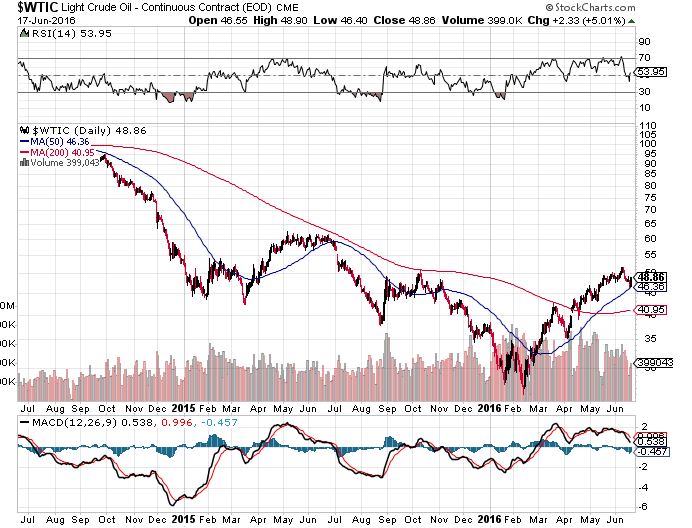 The US dollar continues its downtrend. As the dollar has fallen, US exporters benefit. 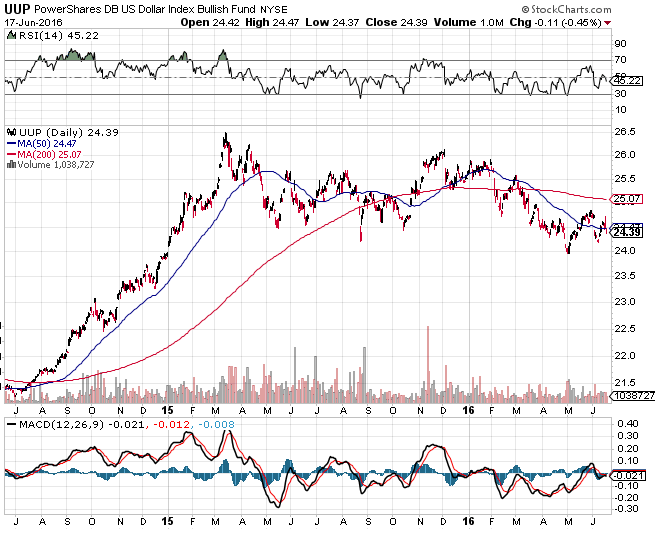 Finally, here is a 2 year chart of the NASDAQ.  This index consists mostly of technology companies and remains in a choppy downtrend that has unfolded over the last year.  Notice the peak in July 2015 and a series of lower highs and lower lows since that time.  The NASDAQ is now down -5.22% over the last year while the S&P 500 clings to a fractional gain over the same time period.  The Russell 2000, a measure of stocks of small companies is down -8.38% over the last year.  This choppy downtrend is the result of the strong dollar, weak oil prices, and flattening corporate earnings.  Experts expect these headwinds to abate during the second half of the year.  Stay tuned! 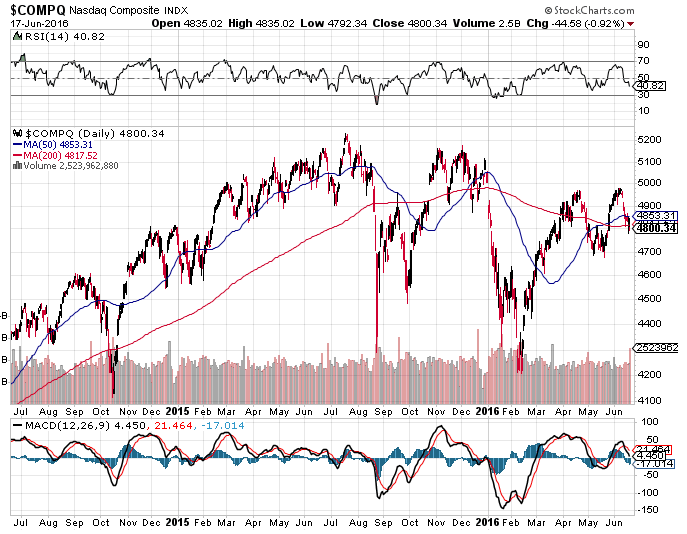 Here is how a number of market indices have recently fared

I wish you all a wonderful weekend!