The US Stock market, as measured by the S&P 500 has been range bound since mid-2014.  Below you see a 4 year chart of the S&P 500, an index of the largest 500 publicly traded stocks in the US.  With a top around 2125 and a bottom around 1850, this choppy sideways trend has shown us meager returns since 2014 with plenty of volatility along the way. 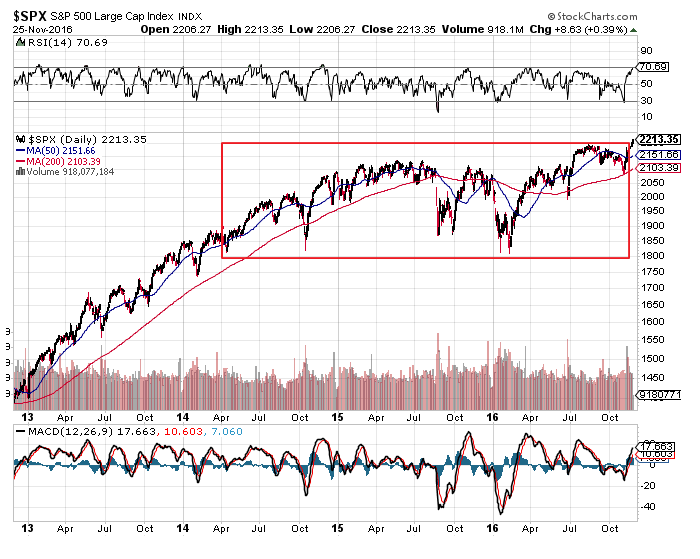 But taking a closer look, we appear to be rising out of the trend box drawn on the chart.  Here is a look at a two year chart.  Notice former resistance points at 2125 and 2175, followed by a breakout (see arrow) to 2213 where the index closed Friday.  Notice also, the short term moving average (blue line) has risen above the long term moving average (red line) on the chart and both of these are now moving upward.  Could we finally be moving above this sideways trend pattern that has plagued the market for more than 2 years? 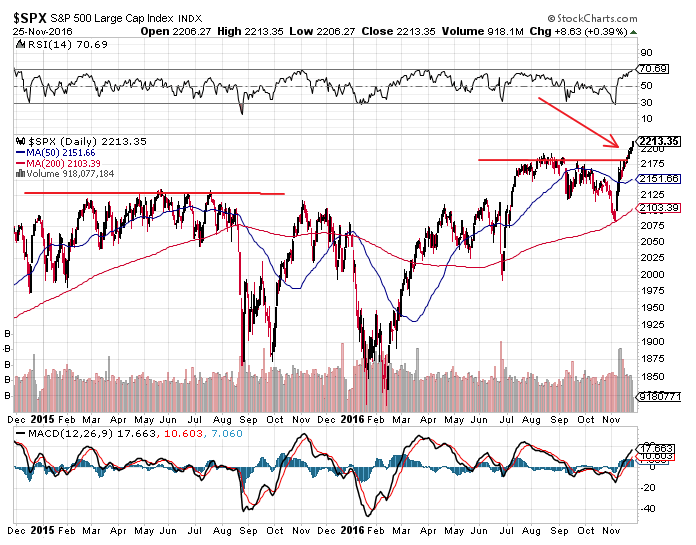 There are a number of factors that are helping, here are a few of the most important factors

Though President Elect Trump has yet to take office, the prospect of deregulation, corporate tax reduction, and infrastructure spending has hinted at potential growth in the future.  We are seeing this especially in the financial, materials, industrials and energy sectors which have all seen recent strength as you can see from the 4 week numbers below.  Investors have been favoring stocks over bonds.

Gross Domestic Product (GDP) is a measure of total expenditures for all final goods and services produced by a country and it is on the rise in the US.  While the most critical factor, consumer spending has been solid since the recession, government spending has been on the decline in recent years in an effort to cut our deficit and national debt.  Though infrastructure spending might boost GDP, it will likely boost our deficit and national debt as well. 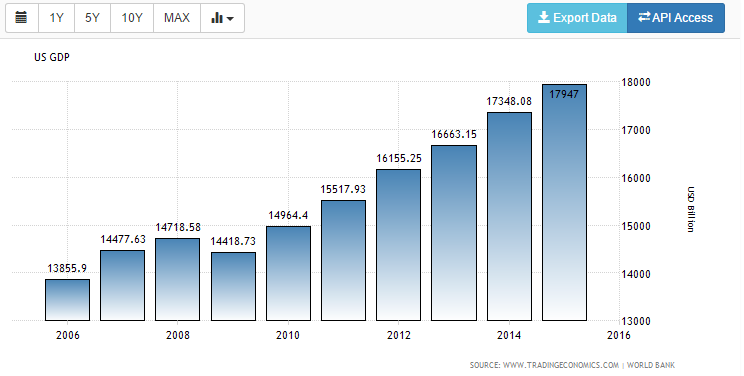 With increased consumer and government spending, less regulation, lower corporate tax rates and cooperation from energy and financial sectors, the prospect of earnings growth is looking rosy.  Below is the most recent earnings estimates from FactSet.  Notice the growth from 2014, 2015, and 2016 is virtually flat, but estimated earnings growth for 2017 is expected to jump by about 10%.  Stocks typically follow earnings so there is potential for growth if the estimates are accurate.  A big if. 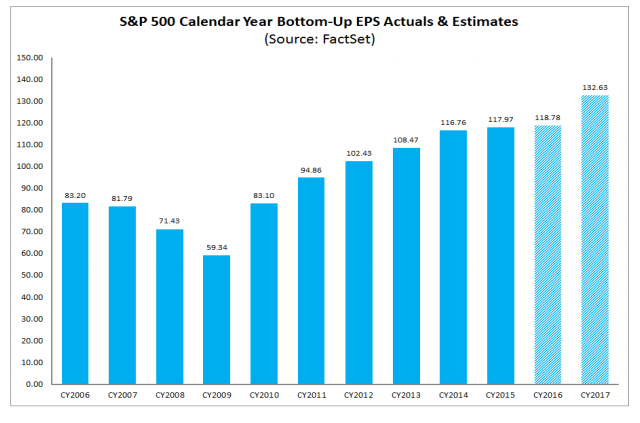 US Stocks have been on the rise, as investors have pulled money from bonds.  This has been spurred by the potential for renewed growth in GDP and corporate earnings on the heels of our recent election.  While the concepts of deregulation, lower corporate tax rates, and infrastructure spending may boost our economy short term, they all have long term consequences.