The S&P 500, a measure of stock prices for the largest 500 US companies set a new all-time high this week.  From a technical standpoint, this is fairly exciting since we have been stuck in a choppy range bound pattern for about two years.  The last all-time high was set in May, 2015.  Below you see a 5 year chart of the S&P 500 with a box drawn around the last 2 and a half years to illustrate the point. 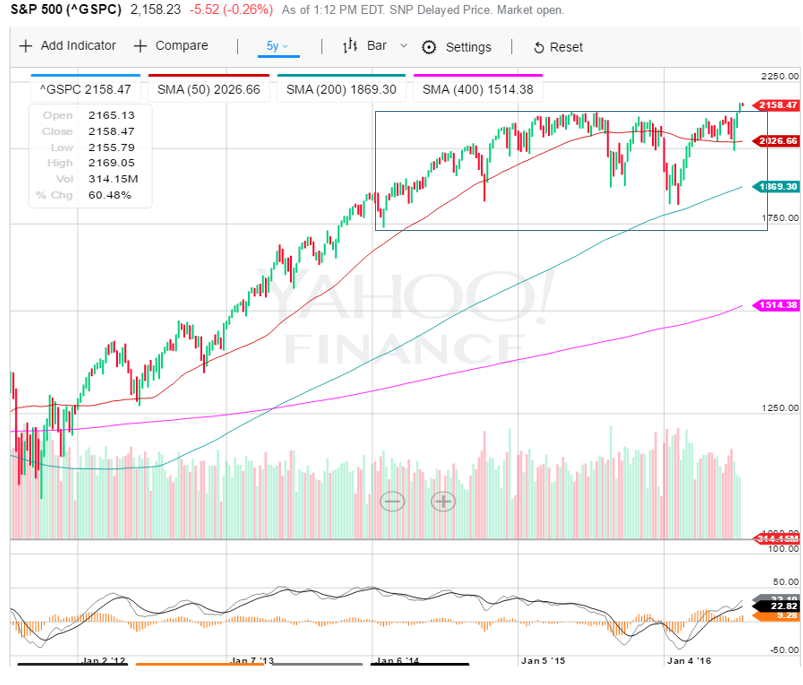 Only time will tell if we fall back once again or continue on to new highs later in the year.  I think this will largely depend on corporate earnings over the next couple of quarters with more on that topic below.  The S&P 500 is now up over 7% year to date following the Brexit selloff just a few weeks ago.  Another positive is that stocks of small companies, as measured by the Russell 2000, are currently up 6.72% year to date and are the top performing major market index over the last 4 weeks.  It is very nice to see small company stocks participating in this current rally as this has not been the case in several years and illustrates a higher risk appetite for investors.

Economic data continues to come in positively and earnings season is so far off to a good start. Despite another terrorist attack in France, the market had a positive week.  The S&P 500 was up 3.15% through Thursday’s close.

Retail sales increased in June for their third monthly gain, manufacturing in June expanded at the fastest pace since January, and industrial production topped forecasts with the biggest gain in 10 months.  The consumer price index also increased for the second straight month which means inflation is starting to creep in.

One of the few sour notes this week was that the University of Michigan’s consumer sentiment index slipped to a 3 month low, likely on concerns over the Brexit vote.  When consumers are sour, they spend less so ideally we’d like to see that number increasing instead of decreasing.

I think the short term direction of the market will largely depend on earnings season which kicked off officially on July 11th and will last for about six weeks.  According to FactSet, earnings for Q2 2016 are expected to decline by -5.4% which is less of a decline than last quarter.  If this happens, it will be the 5th consecutive quarter of earnings decline as you can see from the blue bars below.  There were 26 companies expected to report earnings this week. 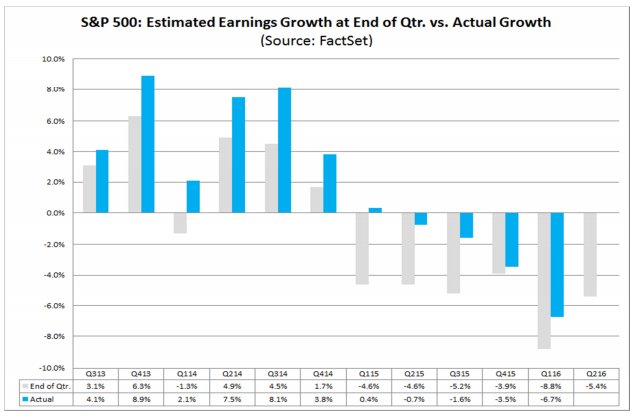 Lastly, below you will see earnings estimates through Q3 2017.  Estimates are shown to increase from Q1 2016 and I believe this will the primary driver of markets over the coming quarters.  Meeting these estimates, should it happen, would be extremely positive.  Failing to meet the estimates will not bode well for markets, and clearly the hurdle is rising. 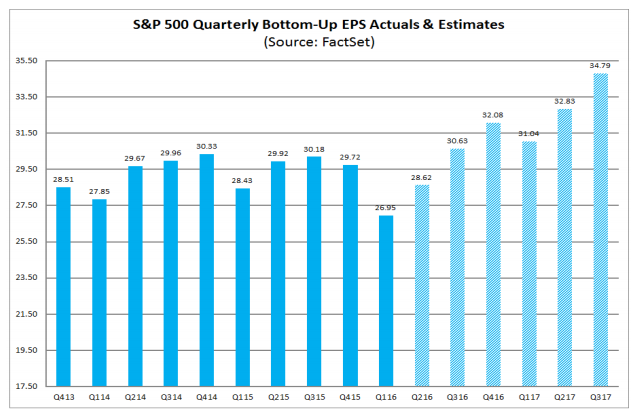 Hope you have a wonderful weekend!