US Stocks, as measured by the S&P 500 as well as the Dow Jones Industrial average, broke a four week streak of positive returns this past week with a fractional decline.  The S&P 500 was down -0.05% and the Dow was down -0.75% for the week.  On a more positive note, Medium sized companies as measured by the S&P MidCap 400 gained 0.49% and the NASDAQ gained 1.22% this week on the heels of positive earnings from the tech sector.

Bond markets in the US gained slightly for the week as well.

Markets have had their eye on a number of items this week.

The US Federal Reserve, a committee chaired by Janet Yellen, left interest rates unchanged at their meeting this past week as was widely expected. They did indicate however, that future interest rate increases are possible as early as the September meeting.  Markets will continue to have to guess as to when the Fed may raise interest rates again.  The Fed has two mandates which are trying to achieve full employment in the US while keeping inflation low at around 2% per year.  The Fed has historically boosted interest rates to try to reduce inflation but in recent years they have kept interest rates near zero in an effort to bring inflation up to their target rate of 2% given our very sluggish economy.  The odds of a rate hike at the September 21st meeting now stand at 12% as you can see from the CME FedWatch Tool below. 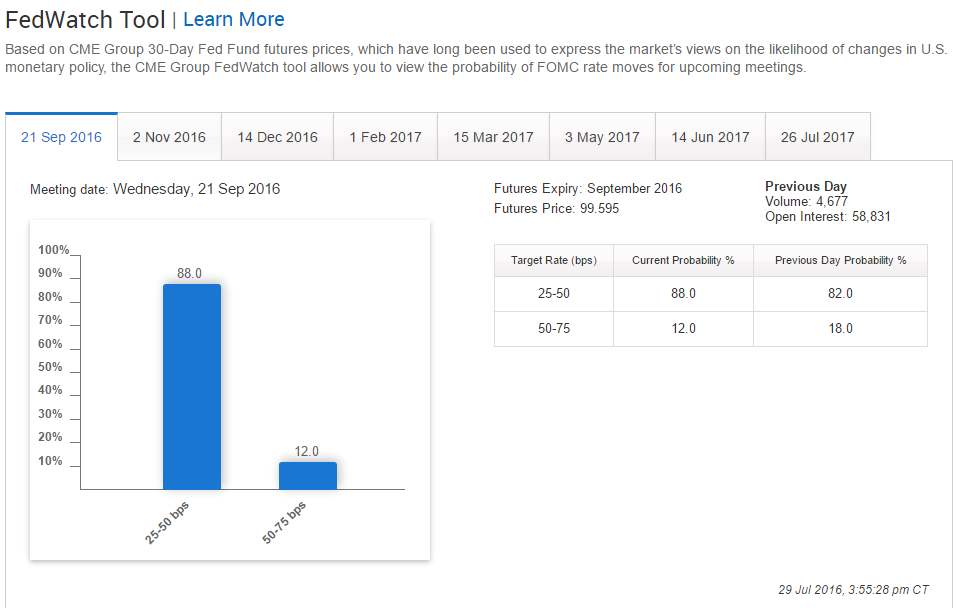 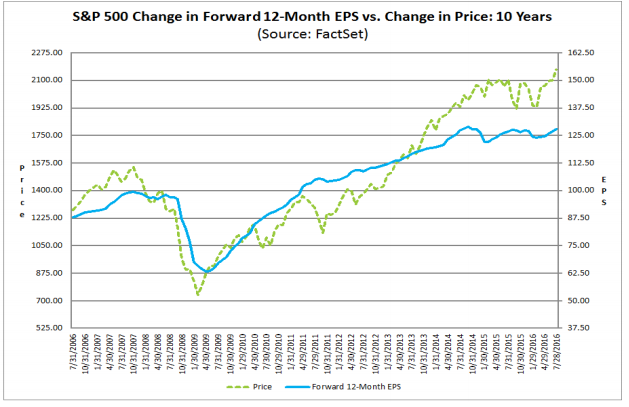 Below is a two year chart of the US dollar which staged a dramatic rise in 2014 and 2015 as the US economy slowly strengthened compared to economies in China and Europe.  The dollar has been trending down since early 2015 but has begun to rise in recent weeks on the heels of Brexit.  In addition, Fed rate hikes or even the threat of a rate hike tend to boost the dollar.  As the dollar rises, goods produced in the US become more expensive for those outside the US thus hurting exporters.  The last few days saw a marked drop in the US dollar as US GDP for the second quarter came in at just 1.2% growth on an annualized basis.  Clearly, our economy is growing at a meager rate and this has tended to lower the chances of an interest rate hike at the September Fed meeting. 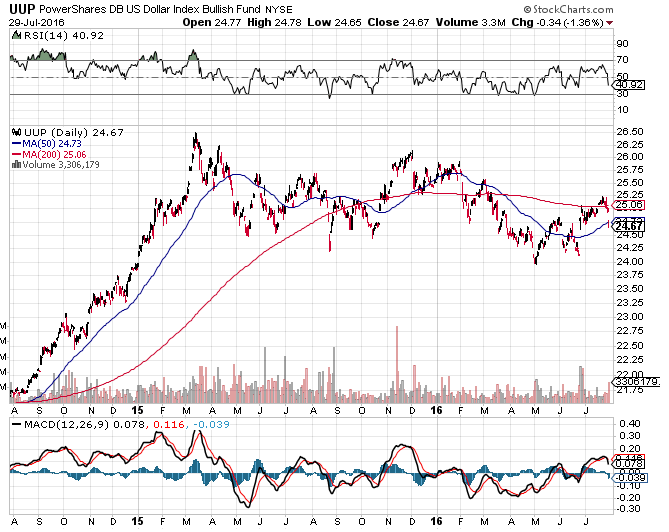 Below is a two year chart of Light Crude Oil.  After a precipitous decline in 2014 and 2015, Oil bottomed at about $25 per barrel in February 2016 and staged an impressive rally to just over $50 per barrel.  However, since climbing back over $50 per barrel in June, oil has been trending down and closed Friday at $41.60 a barrel.  While lower oil prices give consumers more money to spend and transportation companies lower fuel costs, low oil prices also mean big losses for oil companies.  Oil companies have been one of the biggest drags on corporate earnings over the last several years. 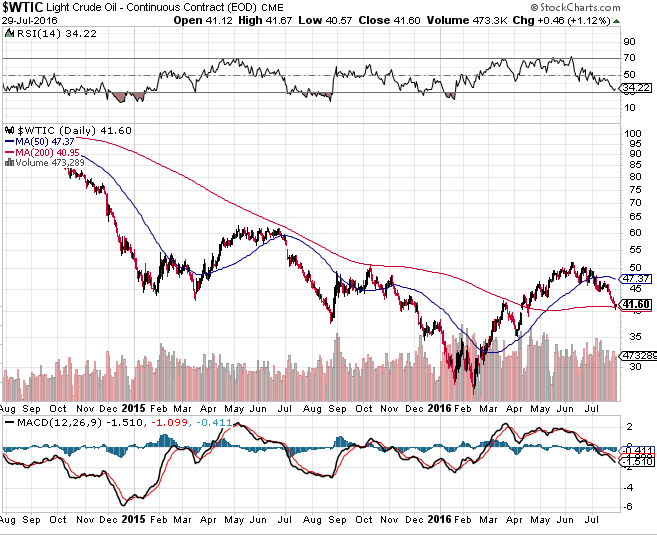 I believe that future corporate earnings will be a major contributor to the future of stock prices.  The good news is that our economy is growing.  Leading economic indicators rose in June by 0.3% and continue to indicate a low risk of recession.  The drag on earnings from plummeting oil prices has abated.  The drag on earnings from a strong dollar has also been on the decline.  On the other hand, wages have started to rise and this could hamper corporate earnings going forward.  So it will be interesting to see these variables play out over the second half of the year.

I appreciate your business and hope you are enjoying your summer!