The US stock market managed to finish a volatile week up a fraction.  Year to date, the S&P 500 which is an index of the largest 500 publicly traded stocks in the US is still up 6.34%.

Bonds as measured by the Barclays Aggregate US Bond Index lost a fraction this week but are still up 5.18% year to date.

Let’s take a look at some of the key components driving market returns of late.

The price of oil has been a headwind for stocks in recent years.  Below you see a 2 year chart of the price of crude oil.  We saw a dramatic decline in 2014 and 2015 with a final bottom for oil prices in February 2016.  The price of oil has been volatile lately and that volatility has translated into increased volatility in stocks as well.  Low oil prices are good for consumers and bad for oil companies.  While the typical US consumer is doing well which boosts corporate earnings, the typical oil company is not doing well and oil companies have been a major drag on corporate earnings.  With oil companies doing poorly, that has also affected banks and bond holders that loaned money to the oil companies.  Fortunately oil prices started to increase in February but are now stuck in a range between roughly $40 and $50 per barrel.  In just the last few weeks, we have seen oil prices down around the low end of this range and stocks have followed those oil prices lower.  A major contributor to these low oil prices is a massive oversupply across the globe. 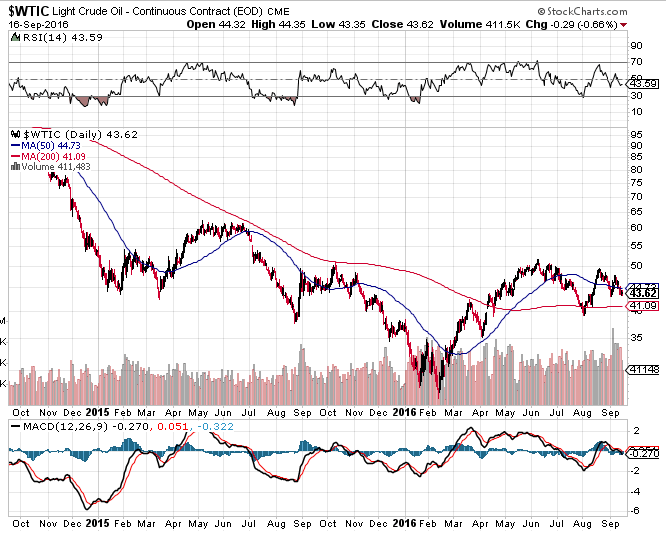 Another headwind for stocks has been uncertainty around the US Federal Reserve and their plans for future interest rate increases.  We continue to see members of the Fed make speeches on an almost daily basis.  One day a speech from one member will be interpreted as rates are about to rise and the next day a different speech from a different member will be interpreted as rates are staying put.  The Fed has another meeting next week, on September 20-21.  After the meeting, we will get a Fed press conference where the Fed will announce the results and give their rationale and plans for the future.  As you can see from the graphic below from the CME Fed Watch Tool, the market sees just a 12% chance that they will raise interest rates.  Why does all of this matter?  Rising rates benefit certain market sectors like financials but hurt other sectors like bonds, real estate, and utilities.  The Fed raises interest rates to try and control inflation, which is currently still very low by historical standards.  The Fed lowers interest rates to boost economic growth.  We have seen exceptionally low interest rates in the US since the recession in 2008. 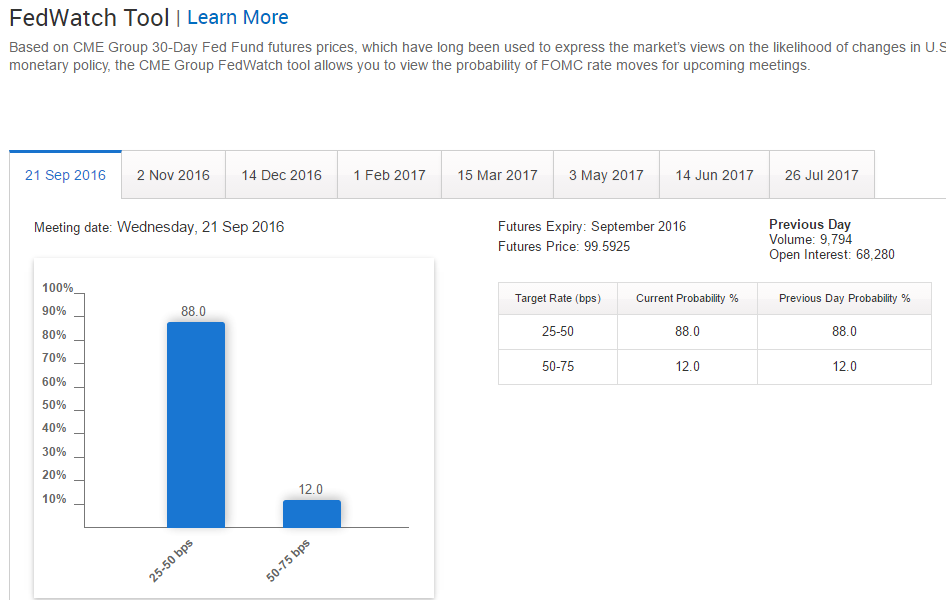 The US dollar has been a third headwind for stocks in recent years.  Below you see a 2 year chart of the US dollar.  The dollar has softened since early 2015 and this has helped US exporters.  A dramatic increase in the US dollar back in 2014 really hurt US exporters and the effects of that strong dollar are still gradually wearing off. 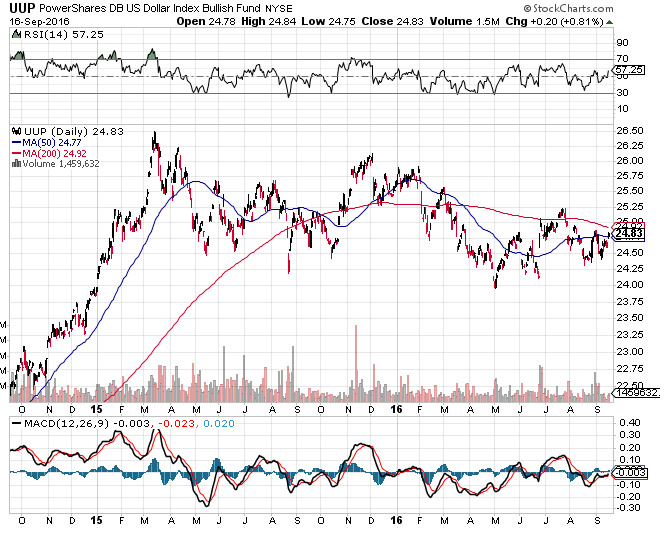 Earnings have been on the decline for 5 consecutive quarters now and stocks typically follow earnings.  Starting in early October, our next round of earnings season will begin with US companies announcing their results for the third quarter.  Unfortunately, analysts are expecting another decline in earnings.  As you can see from the FactSet Earnings Insight report below, the projected earnings decline for Q3 is now -2.1%  If this occurs, it will be the sixth consecutive earnings decline.  As of June 30th, earnings were expected to increase slightly for the third quarter.  So clearly we can see the earnings estimates declining once again which is unfortunate.  I believe our next round of earnings reports will be important for the short term direction of the market.  Stocks advanced in Q2 and Q3 2016, I believe partly because of anticipated earnings increases in Q3 and Q4.  It would be nice to see earnings actually rise, but only time will tell.  A decline in earnings might put stocks at risk. 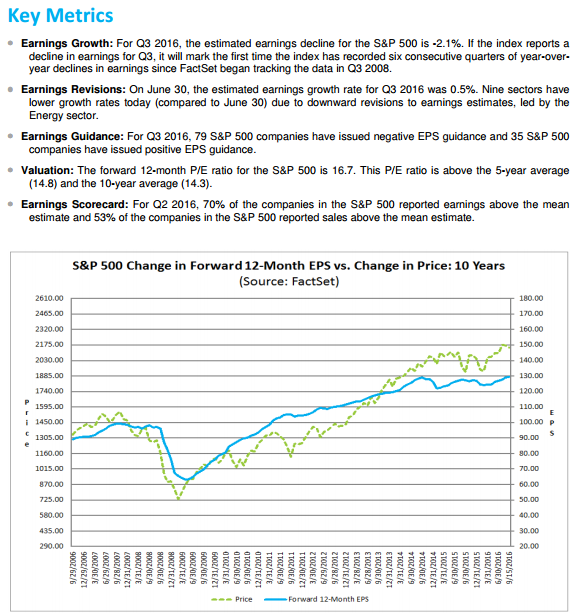 The good news is that our economy continues to grow, though modestly.  Below, you see a graphic of leading economic indicators and coincident economic indicators.  The leading indictors show us where the economy might be headed and the coincident indicators tells us how the economy is doing currently.  Leading indicators measure such things as average weekly work hours, initial claims for unemployment insurance, manufacturers new orders, building permits, and stock prices.  As you can see from the chart, both leading and coincident indicators continue to climb which is a good sign.  A downturn in leading indicators might indicate the beginning of the next recession.  Recessions are not typically good for stocks. 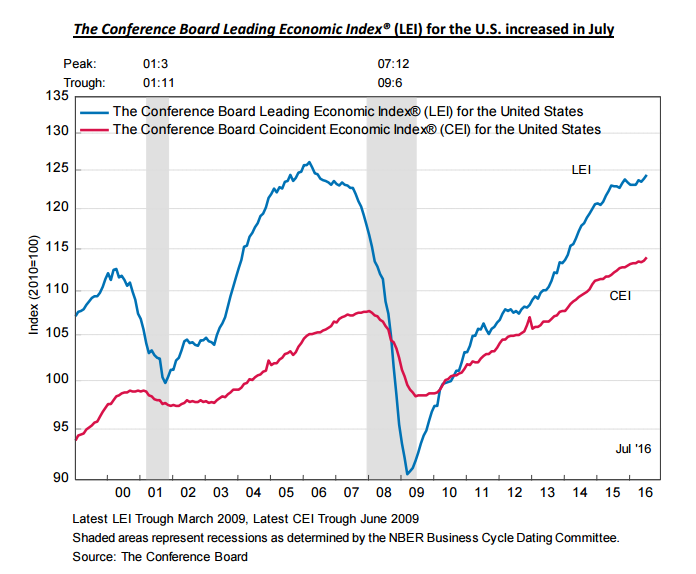 The last couple of weeks have seen an increase in headwinds and stocks and bonds have declined slightly as a result.  Oil prices have seen recent declines, the US dollar has risen slightly, interest rate uncertainty is on the rise, economic growth has softened, and Presidential election polls have tightened.  September is also a seasonally weak period dating back historically with a decline in stocks in 55% of the years dating back to 1926.  The important lesson here is to have a strategy in place that helps you effectively plan for your short, medium, and long-term goals.  That is where I believe I can add the most value for you.  I truly appreciate your business and look forward to serving as your trusted advisor for many years to come.