US Stocks are looking to finish the week roughly flat. The results below are through Thursday’s close.  The market is facing uncertainty with a possible interest rate hike before the year ends and of course the Presidential Election which is the focus of this week's post.

Bonds are looking to finish the week down

Below is a very interesting graphic from Deutsche Bank on the stock market and the election cycle.  As you can see from the panel on the left, the market has historically not performed as well during election years (shown as “Year 4”) as it has in other years. But there are always exceptions and 2015, being the third year of a presidential cycle, did not live up to its historical precedent with a meager return of just over 1%.  Also, so far the S&P 500 is up over 7.5% year to date so we have not seen the last year or two follow the historical pattern depicted at the left.

What we also see from the graphic below is that the market can be volatile with a downward bias in the August – October period going into election day.  Looking at the middle panel below, when elections are close, we have historically seen a downtrend of 2-3% in the August - October time frame as uncertainty weighs followed by a rally post-election.  This year, we have seen a modest decline in stocks over the last 4 weeks with the S&P 500 down roughly 1%.  So far, we are seeing this year play out close to the historical example provided.

Shifting attention to the right panel, we see historical rallies in the November/December time frame post-election.  This has been more pronounced during “close elections” where results are tight and less pronounced during “open election years” when no incumbent is running.  We have an “open election year” this year which would historically be characterized by a few percentage point drop in the August through October time frame followed by a modest recovery post-election once the results are known. 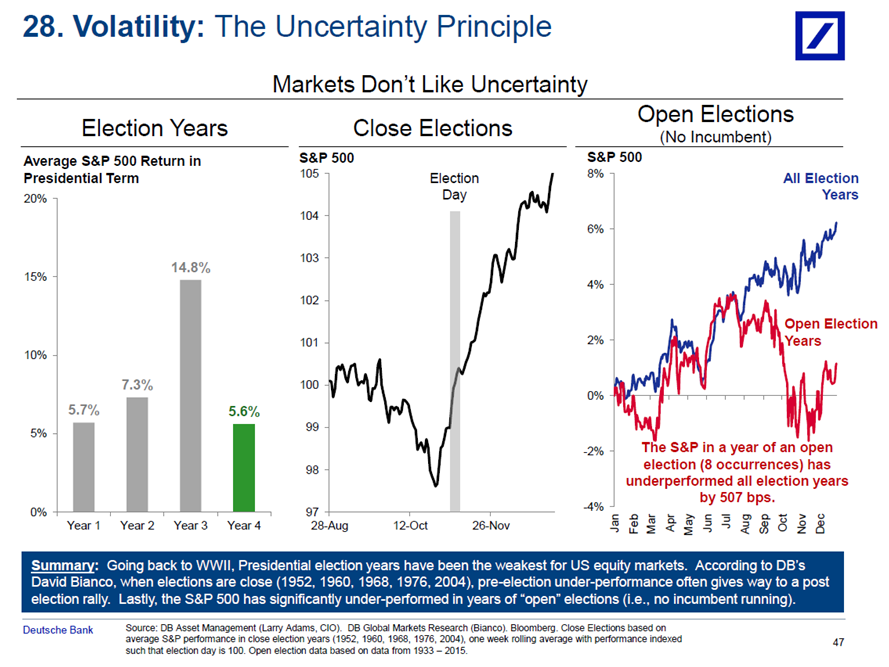 History shows that neither party can claim better market performance during their term. The graphic below shows both positive and negative historical performances during each party’s time in the White House. 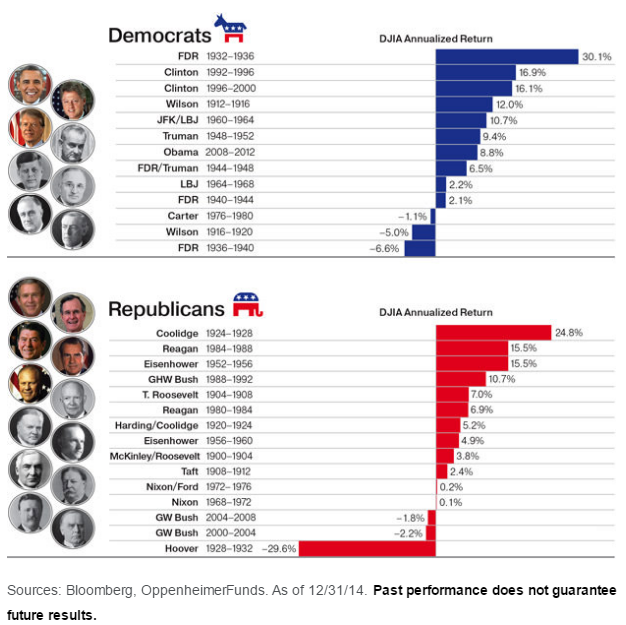 The election does matter though, particularly to certain sectors of the market and below we see the Oppenheimer summary of major public policy issues and their forecast for each post-election. (Source: Oppenheimer Funds 2016 Election Whitepaper.  Here is a copy of the full Whitepaper for further reading Oppenheimer 2016 Election) 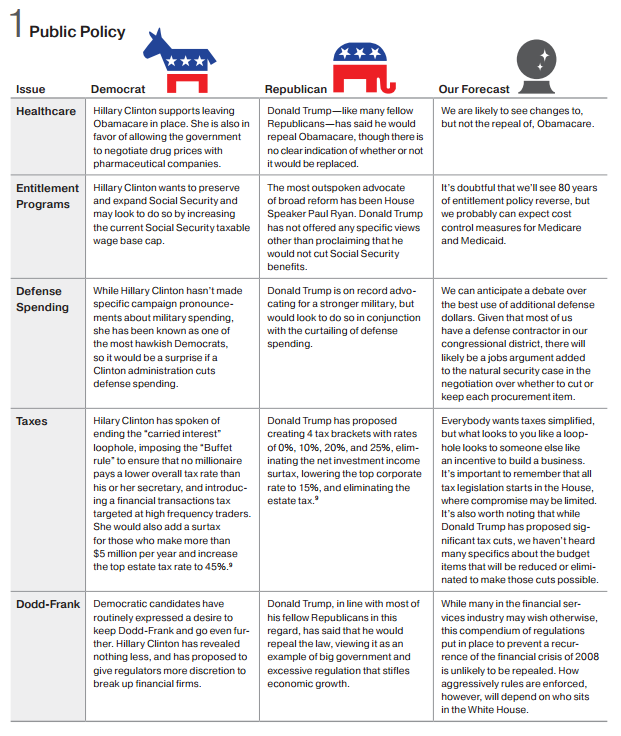 It is important to note that consumers and businesses have a much bigger impact on the market than the government, or the party in power.  Here is another excerpt from the Oppenheimer Funds Election 2016 Whitepaper showing the relatively modest impact of government spending vs. private spending in the US economy.

So in conclusion, we don’t know who our next President will be nor do we know the exact makeup of the House and Senate.  We do know that election years can be choppy and uncertain for markets going into the election and it is possible that uncertainty could continue post-election, especially if Trump happens to win.  A Hillary win in my opinion offers less uncertainty and thus more market stability.  We also know that consumer and business spending are far more important to our economy than the party in power.  This is not a time to try and trade the election, but to sit back and watch this unfold as we stay focused on longer term goals.