Stocks have had a difficult couple of weeks.  The S&P 500 has now experienced 9 straight daily declines.  This is the longest such streak since December 1980.

Despite a stronger than expected earnings season, worries over the Presidential election, and a likely Fed interest rate hike at the December meeting have investors in a very sour mood.

Below is a one year chart of the S&P 500, an index of the largest 500 publicly traded stocks in the US.  Notice the relative strength chart in grey at the top of the chart near the bottom of the range. 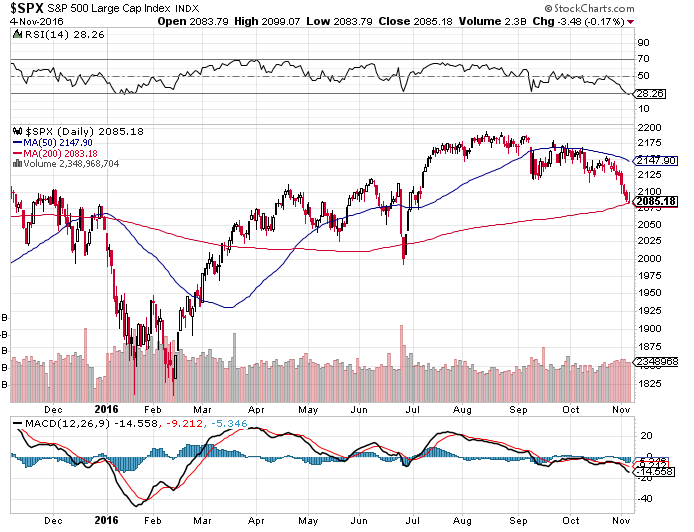 As you can tell from the chart above, and the table below, stocks have basically done nothing but fluctuate in a trading range for the last year.  The S&P 500 and Dow Jones Industrial Average cling to small one year gains while the tech heavy NASDAQ and Russell 2000 (an index of stock prices of small companies) are now down slightly over the last year.  The S&P 500 is down -3.15% over the last 13 weeks and the NASDAQ is down -2.32%.  This is playing out pretty close to the scenario I described in my Market Update – Election edition.  Here is a link to that post: Market Update Election Edition

I don’t know about you, but I’m ready to put this election in the rear view mirror.  Polls have been somewhat mixed showing unclear results about how close the election really is.  The HuffPost Pollster and Princeton Election Consortium show Clinton’s chances of victory close to 100%.  FiveThirtyEight and the New York Times’ Upshot are data journalism sites and put the odds of a Clinton victory at 67.8% and 84% respectively as of Friday.  However, the latest RealClearPolitics poll shows a very tight race.  Which poll is most accurate?  I don’t know, but I guess we will find out Tuesday night.

We have two of the least popular candidates in modern history 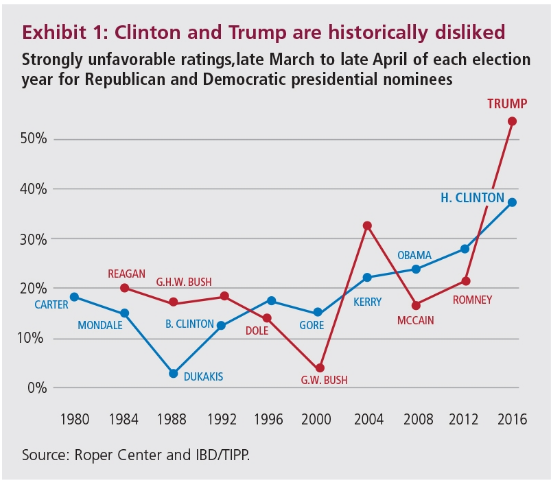 We see also, that investors and traders are scared.  The CNN Money Fear and Greed Index puts sentiment at “Extreme Fear” 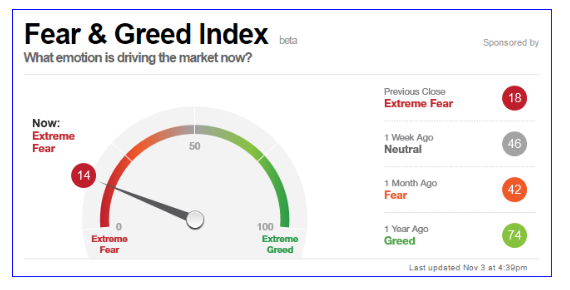 But looking beyond Tuesday and the short term fear/shock/relief/dismay of the election results, we see that average historical performance of the S&P 500 is worst with a Democratic Congress and a Republican President, which is the least likely outcome if we are to believe the polls.  Polls instead indicate a Democratic President with a Democratic Senate and Republican House or a Democratic President with a Republican Congress which are depicted from the two blue bars on the far right.  I think the average return figures of 13.6% and 13.3% respectively are somewhat optimistic in this environment but this shows us what has happened in the past.  As always, past performance may not be indicative of future results. 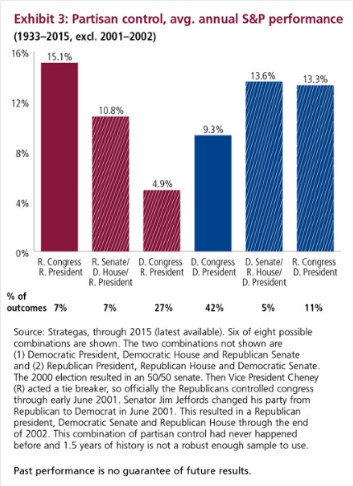 So what is the so called “Smart Money” doing?  Take a look at the chart below showing Commercial Hedging activity.  The number of bullish contracts is on the rise, a similar pattern to what we saw leading up to the Brexit vote. 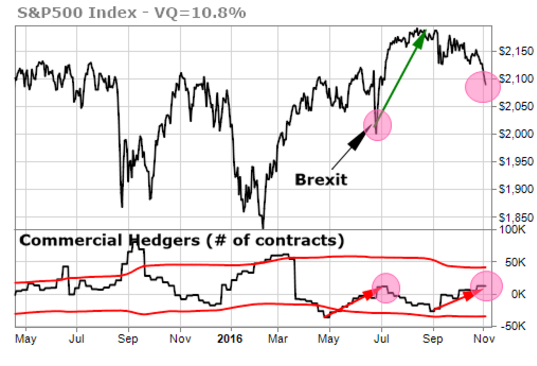 So as difficult as it is to hold the course during times of extreme fear, I believe now is the time to do just that.