Odds That the Market Will Crash

The stock market has experienced a recent bullish rally that started in July, 2016 and our uptrend that started in March 2009 is now the second longest on record.  In addition, a recent study has shown that investors in general think there is a reasonably high chance of a significant market crash in the next six months.  What are the odds that the market will crash?  Should investors be worried? 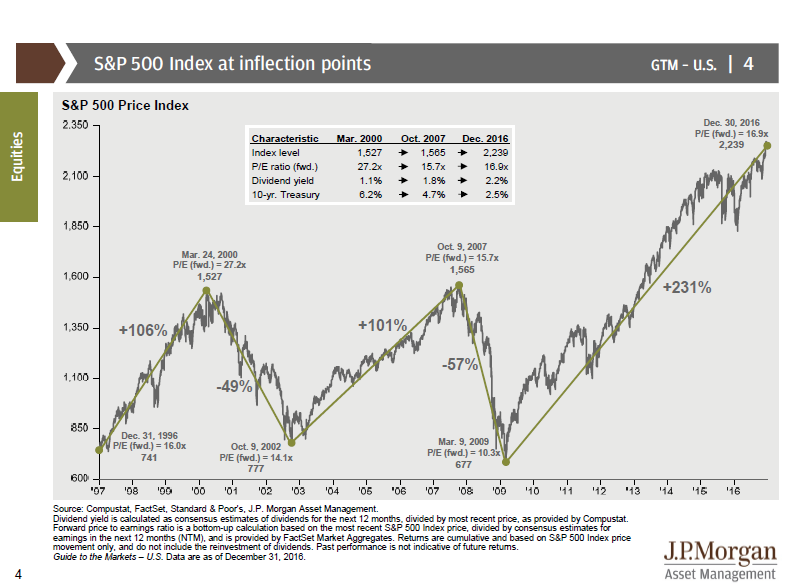 However, US stocks are not dramatically overvalued currently.

If you take a look at the chart below, you will see that our forward price to earnings ratio (P/E) is at 16.9 currently with a 25 year average of 15.9.  Forward price earnings ratio simply divides the current price of the S&P 500 by the estimated earnings for the year.  You can see from this chart that we are well below the euphoric P/E ratios seen in the late 1990’s.  Using this measure, US stocks appear slightly overvalued. 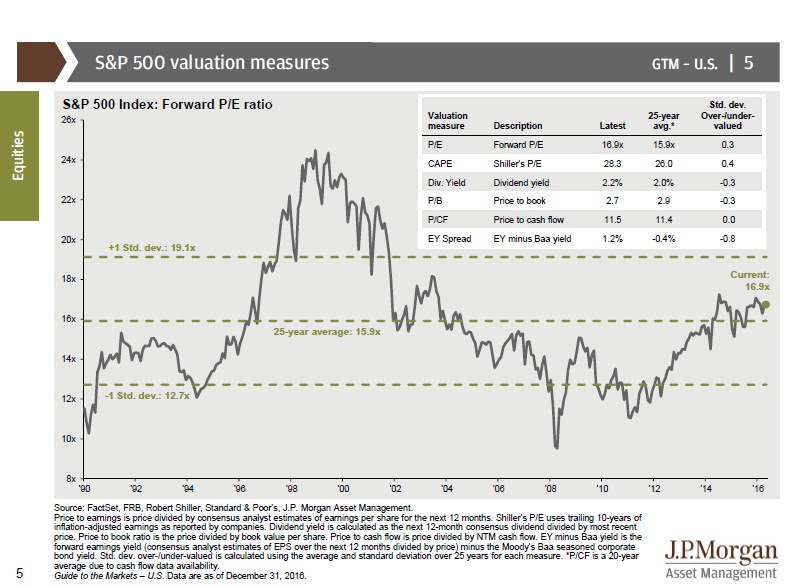 In addition, after a period of decline from 2014 to 2016, forward earnings estimates have actually been rising lately as you can see from the slide below left panel.  Rising earnings help bring stocks closer to their long term average of 15.9.  As I have mentioned in previous blog posts, stocks tend to follow earnings.  When earnings rise, stocks tend to rise, and when earnings fall, stocks tend to fall as well. 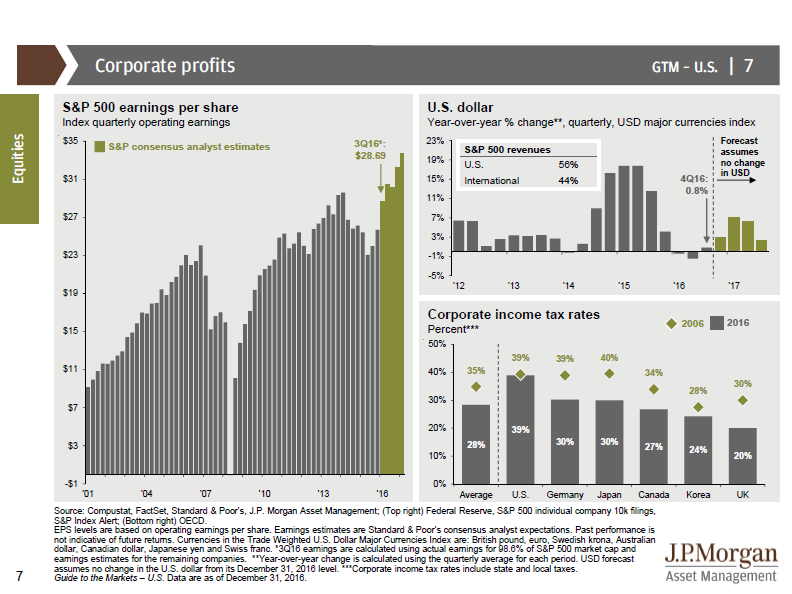 Price to forward earnings is not the only way to measure fair market value.

As you can also see from the slide below, investors could also use other measures like price to book value (P/BV) .  This measures the price of the S&P 500 to the book value of the companies in the index.  Book value is the liquidation value of the company if all of its assets were sold and all of its debts paid off.  Note that the current price to book value is 2.7 and the 25 year average P/BV is 2.9.  By this measure, stocks are actually slightly undervalued. 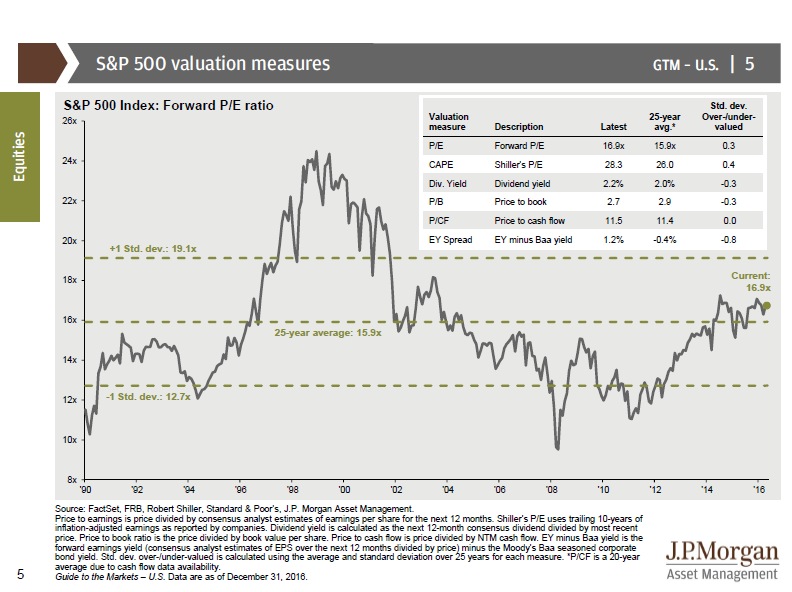 A third way to measure fair market value for stocks is price to cash flow (P/CF).  This measures the price of stocks in the S&P 500 to the expected cash flow of those companies for the year.  As you can see from the slide above, we are currently at 11.5 with a 25 year average of 11.4.  Using this method for valuing stocks, we are pretty much right where we should be.

Should investors actually be worried?

The next graphic shows the calendar year return for the S&P 500 as depicted by the grey bars going back to 1980.  For each year, you also can see a red dot showing the largest intra year decline.  The lesson here is that corrections of between -6% to -20% are fairly common.  Yet in many of the past years, despite those drops during the year, the index still finished the calendar year positively. 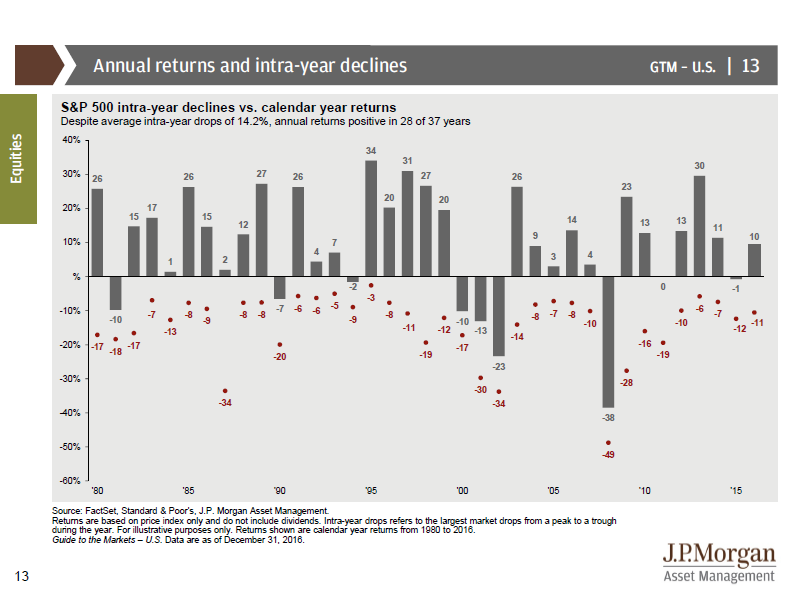 So we can see that stocks are not necessarily overvalued, and smaller corrections are fairly common.  Why are investors so worried?

According to an article written by Mitch Zacks on Zacks.com recent research indicates that investors believe there is a reasonable chance of a serious market decline, yet the odds of this actually happening are historically remote.

“Looking at declines in the magnitude of the October 1987 drop (-22.61%) or “Black Monday” in October 1929 (-12.82%), Yale researchers William N. Goetzmann and Robert J. Shiller along with Case Western Reserve’s Dasol Kim, found that there is a less than 1 percent probability of an extreme stock market collapse in any six-month period.”

“From all the data that he collected, he found that investors, on average, said there was a 19% chance of a one-day market crash in the next six months. This means that investors pegged the likelihood of a crash at 20 times the historical precedent.”

So why are investors so worried?  Zacks’ article points to the negativity of financial media as the culprit for market pessimism.

“The researchers were curious where this additional concern/fear was coming from, and their argument here might not surprise you at all – they cited the negative influence of the news media on investor behavior. The researchers argue that journalists can “frame recent events through selective reporting – emphasizing negative outcomes.” Go figure.”