The Day After - Removing Emotion From Investing

It has been an emotional election season culminating in the surprise victory of Donald Trump as our President elect.  Dow futures were initially down 1000 points (over 4%) as the election results rolled in Tuesday evening, to be followed by a slight gain at this morning’s open.  Markets are still up slightly as of this writing and will likely by choppy and volatile as uncertainty remains.  Almost every national poll showed Clinton cruising to a win heading into election day. My base case was a Clinton win and divided Congress with four years of gridlock to follow.  That is not what happened.  What we see now is an extremely unpopular Republican President elect and a Republican Congress without a super majority.  Trump had minimal support from the Republican party going in to the election which may limit his ability to implement his initiatives. 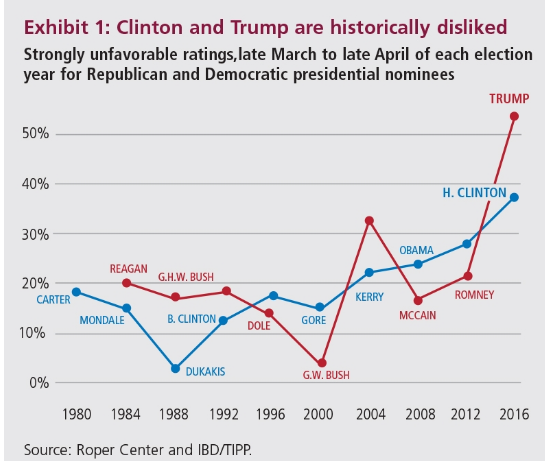 So our reality is the red bar to the far left of the chart below. Though I am extremely skeptical that we will see the 15.1% average return of the S&P 500 which has been the historical average with a Republican President and Congress.  Why?  Because markets are driven much more by corporate earnings than which party is in power.  Corporate earnings have been improving recently after 5 straight quarters of declines. 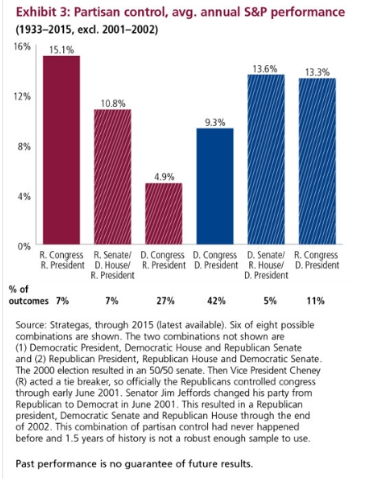 Election years are not typically great for markets and we do see that playing out.  However, we have historically seen a rally of a few percent after a close election heading into year end.  We will have to wait and see if that will hold true this time around. 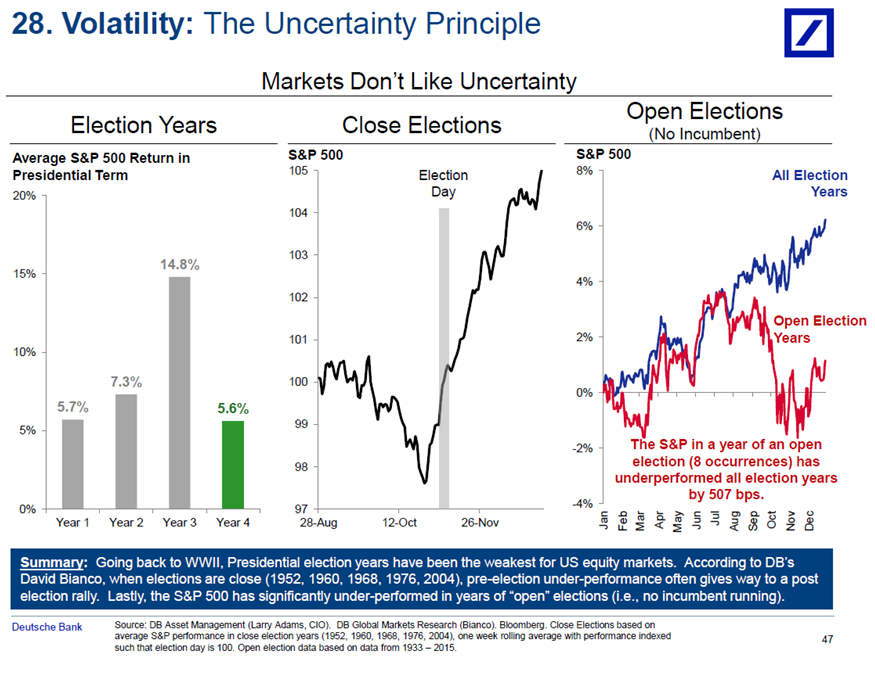 History tells us that neither party can claim good or bad market results.  Below you see both positive and negative performances under Republican Presidents. 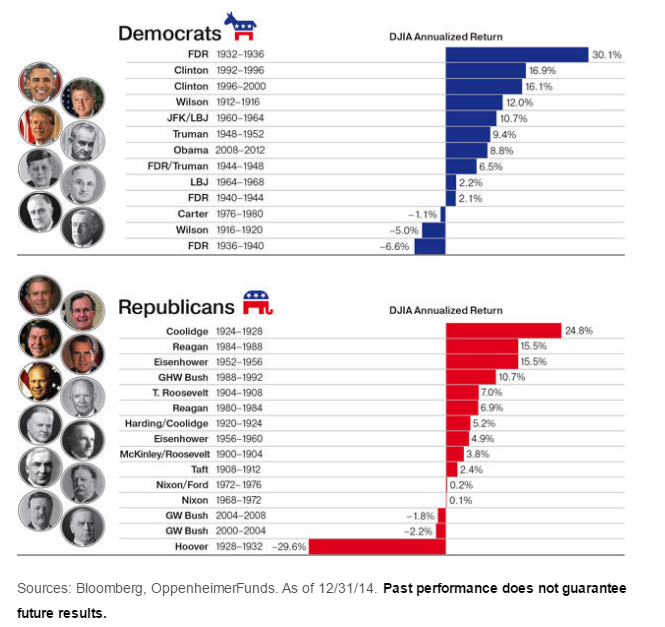 Given the Trump presidency, we may see attempts to repeal the Affordable Care Act, Dodd-Frank, and the Department of Labor’s Fiduciary rule though it is impossible to say if these attempts will be successful.  Deregulation and tax cuts, especially for corporations and higher income earners may be a theme.  Trump will likely favor cutting corporate taxes and trying to bring back corporate cash from overseas which could both be good for US corporate earnings.  However, Trump was very unclear about his policy specifics and he will need to find support from the rest of the Republican party to achieve promised changes.  As a result, I believe we will not see enormous policy changes, but we may see policy drift. 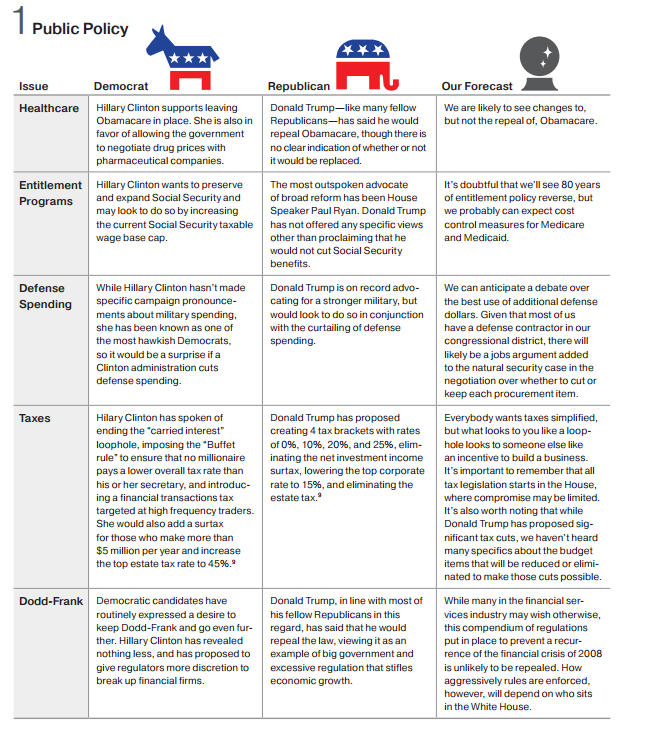 As mentioned previously, far more important that who is in the White House and Congress is the US consumer and US businesses.  So far, both the consumer and businesses are holding up fine.  We have a very healthy employment picture, rising wages, minimal inflation, and low interest rates.  We also have finally seen an upturn in corporate earnings for the first time in a year and a half.

Economically speaking, we still have no signs of recession yet.  Here is a great chart from Doug Short showing the four indicators used by the NBER to gage whether we are in a recession.  While we have seen areas of weakness, especially in industrial production, since the last recession, we continue to make slight progress. 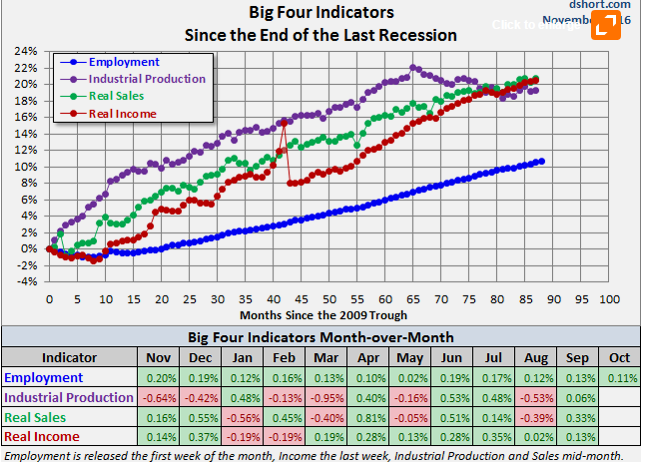 Trying to remove emotion from investing is one of the key roles that a Financial Advisor can play.  We saw this with the shocking Brexit result last summer which saw a dramatic drop in stocks followed by a dramatic recovery within days.  I can’t claim that I am without emotion with regard to the candidates and the election results.  Depending on your views, you may have experienced any or all of the following over the last few hours:

We don’t want these emotions to cloud our investment decisions.  Whatever your politics, I think it’s time to remain calm, not panic, stay focused on the long term.  For a little levity, here is a chart of the stock market over a REALLY long term. Below is a chart of stocks over the last 500 years including the many shocks along the way. : ) 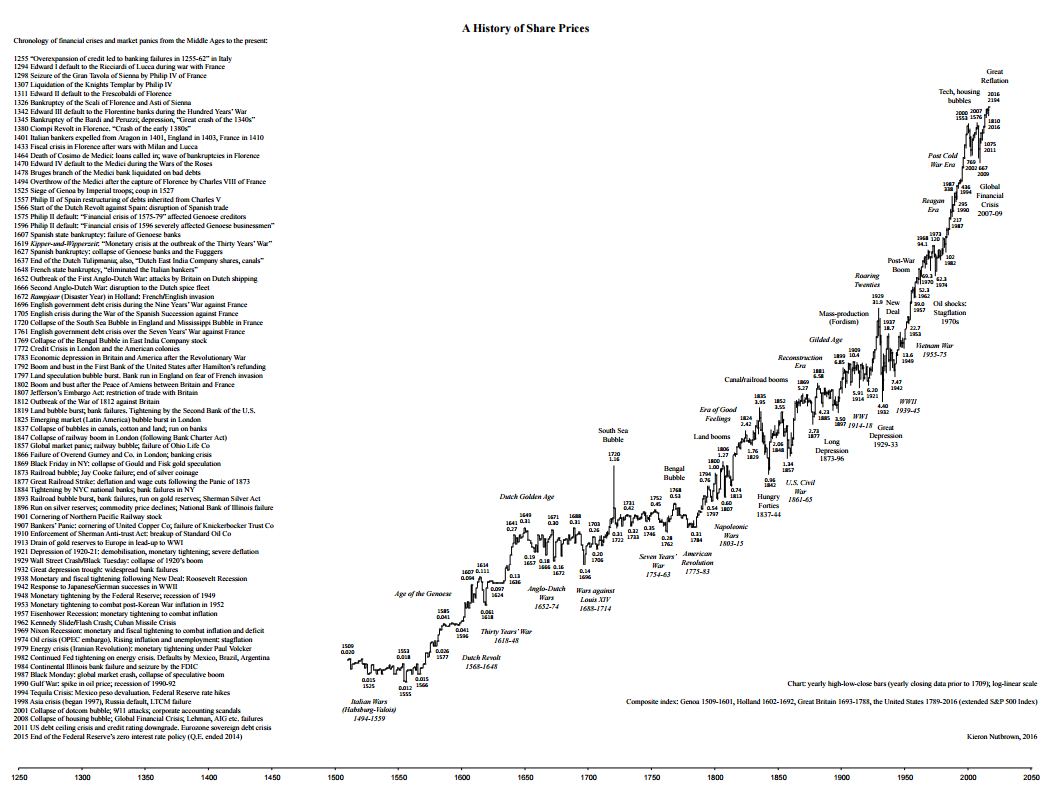